Church as an Agenda beyond the Community 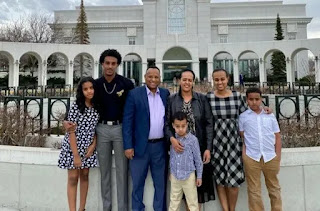 Churches are something of a community.  Many are communities of affinity, a gathering of people who see the world and devotion in a similar way.  They can also be very fluid communities, adding and removing members when such religious/cultural affinity or proximity shifts, either individually or collectively. This is likely an undercurrent of the current ecumenism among many Christians.

There is an interesting formation of this on the outskirts of my own "faith tradition":  The Community of Christ.  This is a group of disaffected followers of Joseph Smith that collected in the decades after his death and ultimately morphed into a feel-good, easy-going faith community centered around peace. Its "community" moniker has become central to its existence and is a good example of putting the concept of community before almost anything else.

The Church of Jesus Christ of Latter-Day Saints (LDS) also built communities, especially in its Pioneer era, that are still very evident in several Western United States, western Canada, and Northern Mexico.  Over time,  most of the elements of "Mormon" stores and sports and theater have been swept away as such localities no longer need mirrored infrastructures of Mormonism vs. everyone else for survival.

The Church of Jesus Christ of Latter-day Saints is all about the Agenda of God at its heart.  A community can certainly contribute to the goals of the Agenda but such communitarianism is just as likely to be a collection of distractions to its founding purpose, ala the Community of Christ.

The Agenda of God is exaltation and those seeking exaltation might have some common peculiarities. However, the isolation of those peculiar people from others in an enclave (ala Jewish shtetls) isn't compatible with a missionary methodology that the Lord charges to members of the LDS Church. You want to be PART of the larger community, not in some corner forming separate places and institutions with "Mormon" stickers everywhere. There is a difference between congregating to survive and making separation and exclusivity into a cultural communitarian standard.

So, a Christ working the Agenda of God may use elements of a community at times to move disciples along the path toward Exaltation while not making the Community the central and defining theme.

In the Church of Jesus Christ of Latter-day Saints, the local subdivision is called a ward, hearkening to the voting wards of cities.  A ward is a geographical thing with defined boundaries and all families and individuals within that boundary attend their assigned LDS ward.  This takes away a certain level of congregational affinity, as one cannot simply choose to attend a ward that they prefer without the effort of physically relocating.

However, one must recall again that the Church of Jesus Christ of Latter-day Saints is more concerned with one's adherence to the "Agenda of God" than community.

This doesn't stop people in the Church from enjoying a community feeling or Church leadership from encouraging more communitarian elements in wards. Some refer to it as a "ward family", though I am personally discouraged of such a concept as it may seek to replace the natural family to which children should especially feel more allegiance and concern.  If anything takes precedence over one's father and mother and siblings, it should be God and his Christ and devotion to following Christ's example in the "Agenda of God", not aspects of congregationalism.

it is easy to be sidetracked from the agenda of God through a feel-good sense of community that may attend a church, denomination, or congregation. Exaltation is bound up in families and a commitment to following Christ beyond allegiance to affinity or group. Don't be distracted from the true goal.