I have just been hit by two "blasts from the past" that conjuncted a few days ago.

When I was in my late 20's, I took a very interesting job as a siesmic navigator on a boat for Petroleum Geoservices, better known as PGS.  I floated on exploration boats for two years and came back to on-shore work when the twins were going to be born.  That was late 1999.

Not too many years later, Lisa and I decided to look at going to graduate school in Shetland, an island group above Scotland. We worked hard to get the arrangements together, but the UK finally said they wouldn't approve a student visa for us, so that plan went down the drain.

Here, I see that a PGS ship, the Ramform Vangard, which was under constuction when I was working for the company, has had to have an extended stay in port at Lerwick (the capital of Shetland). I never thought much of the "Ramform" boats as they reminded me of luxury liners compared to the boats I worked on - they even had a European chef for meals where we settled for a failed Ukranian deckhand as a cook. 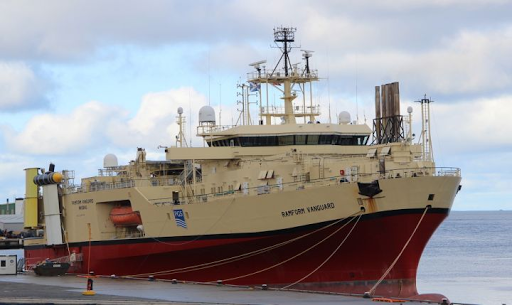